Seriously guys, this review will contain some spoilers. I’m not going to spoil anything major, but be warned that some stuff will be here. 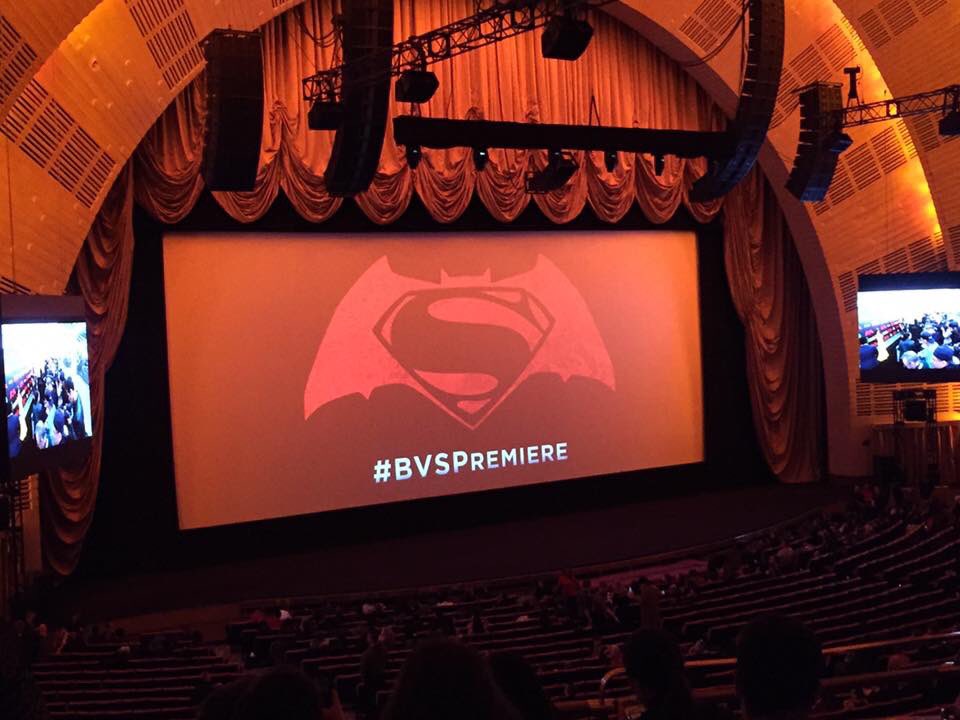 I was at the premiere!!

So, what to say about Batman vs. Superman? Let me preface my thoughts by saying, I went to this film with very low expectations. I thought Man of Steel was meh at best and that was the best Snyder could do. Funny right? I was blown away. Not because I had so little expectations or because I was at the premiere, but because this film is a game changer. Seriously, Marvel and Civil War should watch out because DC is coming. 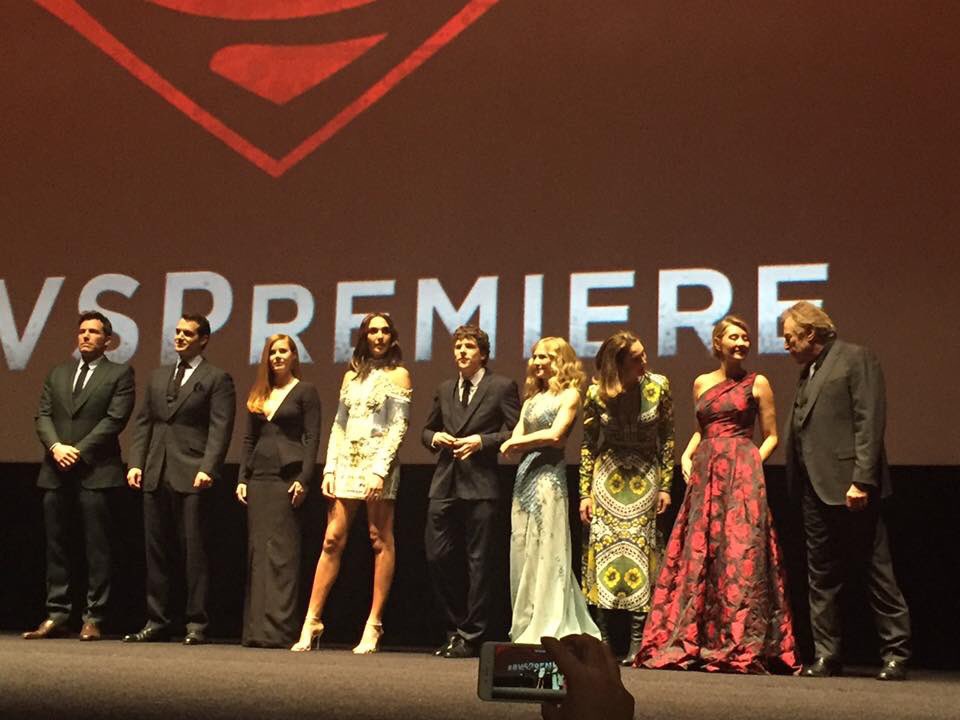 The Cast of Batman vs. Superman at the Premiere.

First, let me talk about the main performances, which were very strong overall.

Henry Cavill is much better as Superman than he was in Man of Steel, where I thought he was very one-dimensional. There is some actual conflict in him, not that random crap that Kevin Costner threw at him. He fights with the world’s expectations of him versus what he expects of himself. He straddles between “god” and “man,” when really what the world needs is a “hero.” He plays his role with emotion and with the kind of poise I expect Superman to have.

Ben Affleck nails Batman. Christian Bale was right, he never nailed Batman, just Bruce Wayne. Now I know what he meant. Affleck plays a Batman who has been working in Gotham for 20 years. He still is the genius, playboy, philanthropist with orphan issues, but he’s also experienced. We don’t need to see how he became Batman because we know what he is. He’s seen plenty and this has left him jaded and angry. What happened in Man of Steel was the tipping point. Affleck embodies Batman who acts with a brutality and anger that we’ve never seen before. Yet, he also acts human with his small reactions and flinches that we would expect from a Batman thrown into this super heroed world. This is not the Batman we all grew up with, but that makes him great.

Amy Adams is great as Lois. She’s proactive and smart, and is only a “damsel” in the sense that she gets herself in trouble. She’s not weak or simpering and I feel that if she had powers, she’d probably be the best hero. Instead, she forces powers that be to move through her sheer tenacity and investigative knack. I’m always a little disbelieving the way she somehow worms her way into every important situation, but I don’t really care because she plays the role so well.

Gal Gadot is also great as Wonder Woman despite having the least screen time of the main cast. Before she introduces herself as WW, she is a mysterious woman who is a little too skilled and knows a little too much. I also loved her small reaction when someone mentions Zeus in her presence. You can see that this person has seen quite a lot. Her motivation for being involved is really plausible too. I was left really wanting to know what happened in her past to bring her to this point (but that’s what her movie is for right?) Her reveal in her costume is nothing less than glorious. I can’t wait to see her in full action.

Finally, Jesse Eisenberg plays, in my mind, a near perfect Lex Luthor. It would have been perfect if he didn’t have a little too much Joker in him. Eisenberg’s Luthor is the closest I’ve seen to a real Luthor on film. Instead of the “smart business guy with Kryptonite” Luthors of the past, Eisenberg’s is the cunning manipulative type. He can ACTUALLY go toe to toe with Superman on a different level. He is the person who could convince a man who is a true hero to doubt. He can twist a well-intentioned person to suit his ends. That’s the kind of Luthor we need for him to be a true villain. For those who thought Eisenberg would disappoint as Luthor, worry not. And yes, he is bald for part of the movie.

The side characters were also done well, Holly Hunter’s senator, Diane Lane’s Ma Kent, and Jeremy Irons’ Alfred are all memorable and well written. Not really gonna talk about Doomsday because he’s not the real villain. There is one cameo that I won’t spoil that puzzled me, but I won’t ruin it for everyone.

The other aspects of the movie are also very well done. Typical for a Snyder film, the action and cinematography are phenomenal. The ever-present shaky cam is gone, thankfully. However, the action scenes also have something that was not present in Man of Steel, tension. With that film, I just watched the scenes and enjoyed the ‘splosions. With this film, I was on the edge of my seat, I was genuinely invested and genuinely worried for the characters. It’s a far cry from smashing Zodd through a million buildings. Of course, the film is also visually stunning, they did spend a ton of money on it and it shows. The environments are great and the action seamlessly blends in.

The pacing and premise are also done well. This is a 2 and a half hour film, but I barely felt it as I watched it. The story progressed in a smooth fashion and I wasn’t really left questioning why certain things happened. The film begins with a vibe that reminded me heavily of 9/11 and that’s a good thing. What happened in Man of Steel was worse than that. Not only was it highly devastating, but it was due to an enemy that was impossible for humanity to fight, raising the stakes even higher. I also found the explanation for Kryptonite to be way more plausible than in the previous films and comics. And, it’s also RARE, so there aren’t a billion pieces of it for Lex Luthor to find every time he has a rock in his shoe. The lighthearted scenes are also well done. They will never be as quippy and fun as Marvel’s but they were good for the pacing and tone of the film. The sad scenes actually had me genuinely emoting. I actually felt for the characters on the screen, in a SUPERHERO film, imagine that?

Finally, let me talk about the story itself. I thought it was a genuinely good superhero plot. It looks like they pulled the best moments from the comics and then made them their own. It’s so different from a typical DC comic, yet it isn’t. Motivations were understandable as well as reactions. People are worried that the trailers spoil everything and they do, but they also don’t. “What?” you ask. Let me explain. Yeah, they show a lot of things in the trailer, some of it from the end of the film. However, they don’t show us why these scenes are happening. I was shocked to see the placement of some of the scenes that were featured in the trailer. The film is filled with surprises like that. Unlike the boring monotony that was Man of Steel, it seems like the new writer was exactly what the series needed.

Now, all the stuff I’ve described above, just makes this a good film. Now, let me tell you why it’s a game changer. DC did it. They caught up to Marvel. They have almost perfectly set up the Justice League. All with two films. Man of Steel, for how mediocre it was now seems a necessary evil, like a Thor movie. It was NEEDED for this film to happen. I can either chalk that up to good planning or a great job adjusting to what was already available. The film is dark and violent as all hell. It is the perfect foil to the happy go lucky Marvel films. They finally nailed their tone and are going to stick with it. They took a TON of story risks that I never thought they’d do and pulled them off. The characters are taken in directions I would have never thought they had the gumption to do. They have huge implications and I won’t spoil them, but man, are they doozy’s. We also get plenty of teases for the next films, (Suicide Squad, Wonder Woman, and Justice League) you can definitely see that this has been planned for quite a while. There are some great cameos that I don’t want to spoil, but they left me giddy. Every piece is set for Justice League and I can’t wait.

The film is not without it’s flaws, but they are just minor quibbles. For example, I didn’t like that Metropolis was placed across the bay from Gotham. I think the film did a poor job overall with world building besides that. I have no idea how superheroes operate in this world. Hopefully the individual films can fix that. I also disliked the origin of Doomsday and how goofy he looked in his initial form (Resembling a troll from LOTR), but whatever, My other quibbles are mentioned above, the bizarre cameo and the Luthor-Jokerism.

I end with this. See this film. If you are a superhero fan in the slightest, you will not be disappointed. As Eisenberg’s Luthor says during the film “the bell has been rung.”